Explanation: Statement about what is there, what it does, and how and why.

Empiricism: The misconception that we ‘derive’ all our knowledge from the sensory experience.

Inductivism: The misconception that scientific theories are obtained by generalising or extrapolating repeated experiences, and that the more often a theory is confirmed by observation the more likely it becomes.

Induction: The non-existent process of ‘obtaining’ referred to above.

Principle of Induction: The idea that ‘the future will resemble the past’, combined with the misconception that this asserts anything about the future.

Realism: The idea that the physical world exists in reality, and that knowledge of it can exist too.

Relativism: The misconception that statements cannot be objectively true or false, but can only be judged relative to some cultural or other arbitrary standard.

Instrumentalism: The misconception that science cannot describe reality, only predict outcomes of observations.

Justificationism: The misconception that knowledge can only be genuine or reliable if it is justified by some source or criterion.

Fallibilism: This recognition that there are no authoritative sources of knowledge, nor any reliable means of justifying knowledge as true or probable.

Problem: A problem exists when a conflict between ideas is experienced.

Good/bad explanation: Explanation that is hard/easy to vary while still accounting for what it purports to account for.

The Enlightenment: [The beginning of] a way of pursuing knowledge with a tradition of criticism and seeking good explanations instead of reliance on authority.

The West: The political, moral, economic and intellectual culture that has been growing around the Enlightenment values of science, reason and freedom.

Anthropocentric: Centred on humans, or on persons.

Fundamental or significant: Plays a necessary role in the explanation of many other things.
Principle of Mediocrity: ‘There is nothing significant about humans.’

Spaceship Earth: ‘The biosphere is a life-support system for humans.’

Constructor: A device that is capable of causing other objects to undergo a range of transformations without undergoing any net change itself.

Universal constructor: A constructor which can cause any raw materials to undergo any physically possible transformation, given the right information.

Evolution (Darwinian): Creation of knowledge through alternating variation and selection.

Replicator [Slightly different from Dawkins’ definition]: Entity that contributes causally to its own copying.

Neo-Darwinism: Darwinism as a theory of replicators, without various misconceptions such as ‘survival of the fittest’.

Meme: An idea that is a replicator.

Memeplex: Group of memes that help to cause each other’s replication.

Lamarckism: A mistaken evolutionary theory based on the idea that biological adaptations are improvements acquired by an organism during its lifetime and then inherited by its descendants.

Fine tuning: If the constants of physics were slightly different, there would be no life.

Anthropic explanation: ‘It is only in universes that contain intelligent observers that anyone wonders why the phenomenon in question happens.’

Levels of emergence: Sets of phenomena that can be explained well in terms of each other without analysing them into their constituent entities such as atoms.

Reductionism: The misconception that science must or should always explain things by analysing them into components (and hence that higher-level explanations cannot be fundamental).

Holism: The misconception that all significant explanations are of components in terms of wholes rather than vice versa.

Moral philosophy: Addresses the problem of what sort of life to lead.

The jump to universality: The tendency of gradually improving systems to undergo a sudden large increase in functionality, becoming universal in some domain.

Quale (plural qualia):  The subjective aspect of a sensation.

Behaviourism:  Instrumentalism applied to psychology. The doctrine that science can (or should) only measure and predict people’s behaviour in response to stimuli.

Infinite (mathematical): A set is infinite if it can be placed in one-one correspondence with part of itself.

Infinite (physical): A rather vague concept meaning something like ‘larger than anything that could in principle be encompassed by experience’.

Countably infinite: Infinite but small enough to be placed in one-one correspondence with the natural numbers.

Singularity [Physics]: A situation in which something physical becomes unboundedly large, while remaining everywhere finite.

Multiverse: A unified physical entity that contains more than one universe.

Infinite regress: A fallacy in which an argument or explanation depends on a sub-argument of the same form, which purports to address essentially the same problem as the original argument.

Computation: A physical process that instantiates the properties of some abstract entity.

Proof: A computation which, given a theory of how the computer on which it runs works, establishes the truth of some abstract proposition.

Precautionary principle: Avoiding everything not known to be safe.

The principle of optimism: All evils are caused by insufficient knowledge.

Wealth: The repertoire of physical transformations that one is capable of causing.

Fungible: Identical in every respect.

The world: The whole of physical reality.

Multiverse: The world, according to quantum theory.

Universe: Universes are quasi-autonomous regions of the multiverse.

History: A set of fungible universes, over time. One can also speak of the history of parts of a universe.

Parallel universes: A somewhat misleading way of referring to the multiverse. Misleading because the universes are not perfectly ‘parallel’ (autonomous) and because the multiverse has much more structure, especially fungibility, entanglement and the measures of histories.

Quantum: The smallest possible change in a discrete physical variable.

Decoherence: The process of its becoming infeasible to undo the effect of a wave of differentiation.

Uncertainty principle: The (badly misnamed) implication of quantum theory that for any fungible collection of instances of a physical object, some of their attributes must be diverse.

Quantum computation: Computation in which the flow of information is not confined to a single history.

Bad philosophy: Philosophy that actively prevents the growth of knowledge.

Interpretation: The explanatory part of a scientific theory, supposedly distinct from its predictive or instrumental part.

Positivism: The bad philosophy that everything not ‘derived from observation’ should be eliminated from science.

Logical positivism: The bad philosophy that statements not verifiable by observation are meaningless.

Representative government: System of government in which the composition or opinions of the legislature reflect those of the people.

Social-choice theory: The study of how the ‘will of society’ can be defined in terms of the wishes of its members, and of what social institutions can cause society to enact its will, thus defined.

Popper’s criterion: Good political institutions are those that make it as easy as possible to detect whether a ruler or policy is a mistake, and to remove rulers or policies without violence when they are.

Aesthetics: The philosophy of beauty.

Elegance: The beauty in explanations, mathematical formulae and so on.

Explicit: Expressed in words or symbols.

Implicit: Implied or otherwise contained in other information.

Culture: Set of shared ideas that cause their holders to behave alike in some ways.

Rational meme: Idea that relies on the recipients’ critical faculties to cause itself to be replicated.

Anti-rational meme: Idea that relies on disabling the recipients’ critical faculties to cause itself to be replicated.

Static culture/society: One whose changes happen on a timescale longer than its members can notice. Such cultures are dominated by anti-rational memes.

Dynamic culture/society: One that is dominated by rational memes.

Imitation: Copying behaviour. This is different from human meme replication, which copies the knowledge that is causing the behaviour.

The ascent of man: The beginning of infinity. Moreover, Bronowski’s The Ascent of Man was one of the inspirations for this book.

Sustain:  The term has two almost opposite, but often confused, meanings:  to provide someone with what they need; and to prevent things from changing. 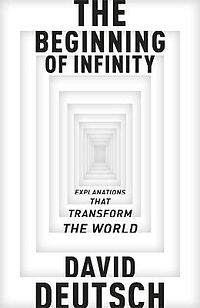 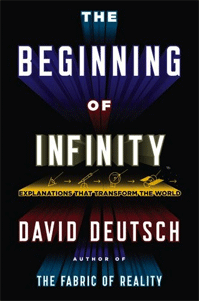