Can anyone answer these questions for me?

If you know any of the answers, please email them to me at david.deutsch@qubit.org and earn my eternal gratitude.

In what class of 4-dimensional spacetimes does there exist a real, non-constant scalar field φ with the following properties:

(I would like the answer to be: “almost none”, but don’t let that influence you.)

I read somewhere (I think it was in the works of George Mikes) that in the early months of World War 2, one of the London newspapers staged the following stunt: they got someone to dress in the uniform of a Nazi storm trooper and march up and down Whitehall all day, and no one paid any attention. Did that happen, and if so, where can I find out about it?

Answer: Thanks to K.A. Taipale and Ben McCracken for this story. It’s so similar to what I remember reading that it must presumably refer to the same event, though some of the details are significantly different. Memory – mine or George Mikes’s – may have played tricks.

Churchill once quoted Disraeli as saying “The Lord deals with the nations as the nations deal with the Jews”. Is this merely a paraphrase of Disraeli quoting Genesis 12:3, or is it literally a quote from Disraeli? Either way, where did Disraeli say it?

Answer: Thanks to Steven Gerard Wagner for the following: “Although the quote captured what Disraeli conveyed in his 1854 parliamentary speech, as well as several of his literary works, Disraeli never put it exactly that way; the quote was apparently transmitted orally by Gladstone.” (Michael Makovsky, Churchill’s Promised Land, page 47, with note 15 reference to Jenkins’s bio. of Gladstone).”

Thanks also to Michael Bacon, Guido Deutsch (no relation), Caroline Rogers, and Richard Dowling, each of whom supplied essentially the same answer independently.

My Contribution to the UFO Debate

You’ve heard of Crop Circles? Well, here’s something even stranger which I have seen with my own eyes, and have personally photographed: 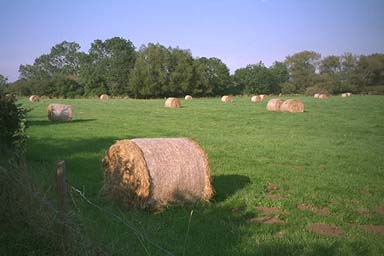 Crop Cylinders
Moreover, I will stake my scientific reputation on the proposition that these cylinders not only existed, but were no accident: they were placed there by intelligent beings – and later removed to a destination I can only guess at.
Questions

I have signed this petition and statement of solidarity with Israeli academics, in response to recent calls for an academic boycott of Israel.